Inspiration / Day of the Dead Makeup 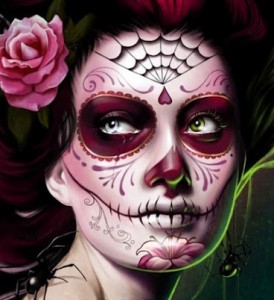 Painting skin textures for 3D models can really be enjoyable, as well as really challenging. One of the challenges is coming up with ideas for skin textures that are different, exotic and creative.  Since my realm of experience doesn’t include fashion or makeup, once again I find myself going to the internet for superior examples that I can use for reference.This has resulted in a fascination with “Day of the Dead” makeup, which turned into a separate Pinterest board.

The Day of the Dead combines Spanish Catholic beliefs and indigenous Aztec traditions. “Dia de los Muertos” is filled with symbolic imagery and the skull is the most powerful.  The Aztecs believed that life was an illusion and death was a positive step to a higher existence. For this reason, the skull is considered to be a positive symbol, not just of death but also of rebirth.

Another is the Marigold, which is known as the Flower of the Dead.  On the Day of the Dead, it is believed that the souls of departed friends & family return. The scent of the Marigold is supposed to help guide their way.

The people of Mexico have long worn skull masks on the Day of the Dead and this has lead to the tradition of skull face-painting. Wearing skull makeup or masks allow people to connect with their darker, more chaotic side, overcoming their fear of death and acting more reckless & mischievous. 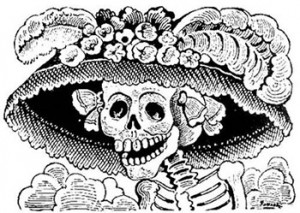 The notion of making the skull makeup feminine & elegant as well as scary stems from a 1913 etching by José Guadalupe Posada, “La Calavera Catrina” – (The Elegant Skull). It was a reminder that even the rich and beautiful cannot escape death.